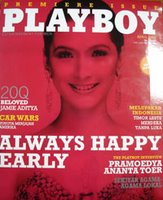 Two policemen were injured Wednesday when about 100 demonstrators, most of them Islam Defenders Front (FPI) members, attacked the Playboy Indonesia editorial office in South Jakarta.
Protesters pelted the building with rocks, shattering windows and panicking the tenants. The injured police personnel, who were guarding the building, were admitted to nearby Fatmawati Hospital for treatment.

Riot police personnel finally managed to calm the crowd, who were protesting last Wednesday's publication of a local version of the men's magazine. FPI leader Habib Riziq earlier said the group was ready to "go to war" unless their demands were met for the magazine to cease publication.

South Jakarta Police chief Sr. Comr. Wiliardi Wizard said they would summon the FPI as the coordinator of the protest.

"Prior to the rally, they sent a letter to the police asking for permission to demonstrate. Unfortunately, they could not restrain themselves and keep their anger under control," Wiliardi said.

He recommended the management of Playboy suspend activities temporarily because of the strong negative reaction from some sections of the public to the first edition.

The Independent Journalists Association (AJI) condemned the attack. AJI secretary-general Abdul Manan said members of the public who disagreed with the magazine's publication could seek legal recourse instead of using violence.

"According to press regulations, the FPI could face a maximum Rp 500 million fine," he said.

"In my opinion, this incident shows how the police did not take decisive action to stop a violent protest."

Chief editor of Playboy Indonesia Erwin Arnada said that he respected the public's right to express their views about the magazine, but said it should be done in a peaceful manner.

"Playboy Indonesia is in full compliance with Indonesian law and does not, and will not, contain any nude photography. We have also taken extra measures to prevent the magazine from being read by minors, including selling the magazine in a sealed envelope and placing an 'adults only' label on the cover," Erwin said.

The demonstrators earlier visited National Police Headquarters to complain about the publication of the magazine. They made a bonfire of about 100 copies of the magazine.

From police headquarters the protesters walked to the nearby Attorney's General Office and gave speeches, relayed by giant speakers transported on a pickup truck.

Representatives of the FPI, including Habib, met with public relations officers of the Attorney General's Office.

Riziq told the officials that the publication of Playboy magazine violated the Criminal Code.

"We have reported the chief editor of the magazine, the models, journalists, photographers and 26 companies that have placed advertisement in the magazine to the police," Riziq said.

Email ThisBlogThis!Share to TwitterShare to FacebookShare to Pinterest
Labels: On Media